It’s time to face evil Dracula who has captured Scooby and Shaggy in his castle. Race to their rescue, battle against his army of monsters and help Scooby and Shaggy escape! Use the opening turrets to explore every spooky nook and cranny of the castle, watch out for the trapdoor as you make your way passed Dracula as he sleeps in his glow in the dark coffin! Collect and construct Scooby’s world. 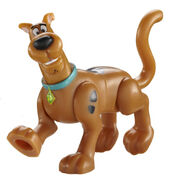 Playset action features
Add a photo to this gallery
Retrieved from "https://characterbuilding.fandom.com/wiki/Dracula%27s_Castle_Playset?oldid=7052"
Community content is available under CC-BY-SA unless otherwise noted.