This is the first series outside of Doctor Who to feature Super-Rare figures. It also included the first female figure in the range.

In addition to the 12 standard Series 3 HMAF Character Building figures, there are also three Super Rare figures. The three to collect are 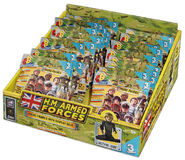