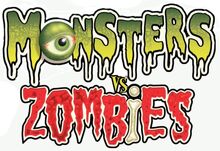 This range features classic Monsters and wide variety of Zombies. It is also unusual in that several of the Micro Figures are Glow in the Dark. The figures are fully compatible with other Character Building Micro Figures.

Monsters Vs Zombies is one of the ranges produced in partnership with COBI toys.

There are 12 highly detailed and fully articulated micro-figures each sealed within a secret bag.

Expand your Monster or Zombie army with these Multi Packs. Each pack includes 5 Micro Figures.

Expand your ghoulish fun with these constructable Playsets. Each set also include Ghoulish Goo!

COBI toys have a more extensive range of playsets which we may see released by Character Building in the Future, some of which include:

Here is an official Advert for the range.
Retrieved from "https://characterbuilding.fandom.com/wiki/Monsters_Vs_Zombies?oldid=7212"
Community content is available under CC-BY-SA unless otherwise noted.