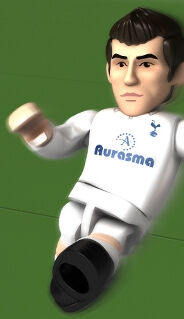 The first series to be released contained 12 different figures.

Collect all 12 sections of pitch and connect them together to build a 51 x 38 cm football pitch. There are two mystery outfield micro-figures or one mystery goalkeeper micro-figure included within each pack.

Character Options is looking for five new teams to add to its Sports Stars line-up - but they need to be real-life youth teams that the brand will sponsor with new kits for the 2013/2014 season.

The Character Building 'Are your team Sports Stars?' campaign kicks off next month with the aid of three kids' football magazines - Kick, Match of the Day and Match magazine - plus children's weekly newspaper, First News.

The focus of the activity will be the search for five FA youth teams that will receive new kits for their team, as well as featuring in Kick for the rest of the year with their wins, performances and news of their star players.

Team Sports Stars is just one part of the activity surrounding the brand in celebration of the launch of series two of the Character Building Sports Stars football construction range. This season will see Manchester City added to the squad of over 100 famous footballers.

"Sourcing real teams for a sponsorship programme as part of the Sports Stars marketing strategy gives us the chance to back a handful of children's football teams," sais Mark Hunt, Character Building's brand manager. "Football is a major part of many children's lives but often funding is lacking, and so we are delighted that we can support the chosen teams by kitting them out in their new Character Building Sports Stars team kits.

"This new initiative is just one of three inspirational campaigns we have for the brand this autumn."

Judging of Team Sports Stars will take place throughout August and September, with new kits being presented to the selected teams at half term.

Community content is available under CC-BY-SA unless otherwise noted.
Advertisement